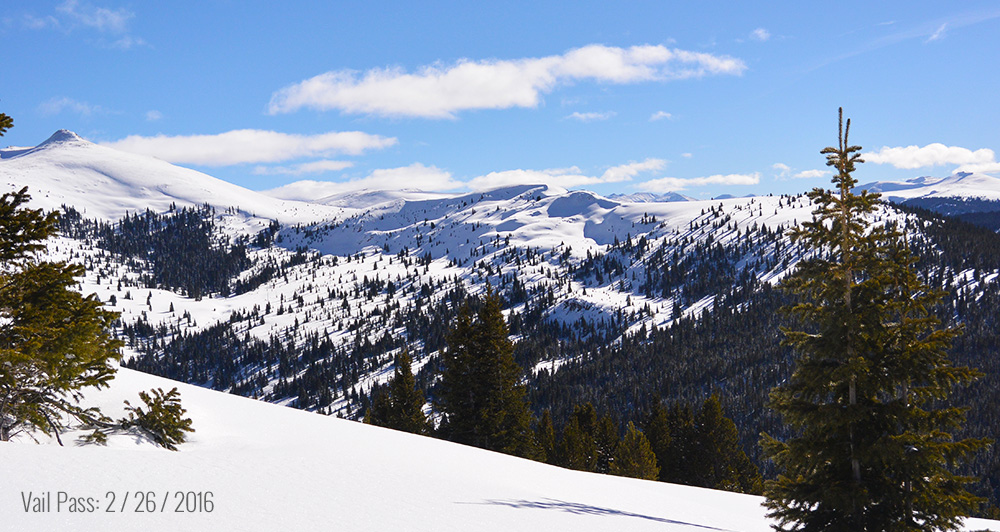 Your local forecaster is wrong... about Colorado weather

Years ago I was delivering some product to a client in Vail Village. It was two days before the opening weekend which for Vail Mountain is always around Thanksgiving. The ski patrol had already posted the runs that would be available for opening day. Per usual, it was just the front side of the mountain that was set to open. Meanwhile, a few feet next to me there was a young man in his early teens standing next to his younger brother. While looking at the large trail map that was mounted on the wall, the younger of the two was pointing out all of the runs he was hoping to ski. In a fit of rage, the older brother threw his arms in the air, tossed out a few choice words and finished by saying “None of those runs are open. They are never open. Every year we come here, they are never open.”

Now you can understand the young mans’ frustration. He most likely traveled a long way with the hopes of skiing the back bowls of Vail in untracked powder. To make matters worse, when the young man looks up on the mountain, he can clearly see that all of the peaks are covered in snow. However, when he reviews the map, he learns that those same runs that are covered in snow will not actually be opening.

You can’t blame the kid for his frustration. You also can’t blame Vail Resorts. Vail Resorts has a responsibility to their guests to provide a safe environment and when it comes to early season snowfall, many times, it takes a while for the snow to settle and form a safe base to ski on. That is a battle that Vail Resorts and all winter-based companies here in the mountains deal with. Even here at Rocky Mountain Adventure Rentals, we need to perform early season snow depth checks to make sure the regions are ready to ride. It is the reality of the early season.

Early season snow conditions only represent one of the many challenges that local mountain businesses have to navigate in order to have a successful winter season.

One of the larger challenges is dealing with the professional guessers of the world who call themselves “Weather Forecasters” or “meteorologist.” They are much like Punxsutawney Phil but without the pizzazz and fanfare. Now I’m probably being a little too harsh and maybe a bit childish in my name calling but I felt it was the best way to vent my frustrations with the industry as a whole.

There is a national lack of understanding when it comes to the Colorado Rocky Mountains and the weather patterns of the state of Colorado as a whole. I myself, who is originally from the Detroit area, used to believe that Denver was a cold city and that Denver represented the majority of Colorado. After all, Denver is the most widely known city in the state and the state itself is known for alpine skiing. I moved to the central mountains back in ’98 and have since learned that the direct opposite is true when it comes to weather and temperature. Denver is a very warm, high desert climate and the weather of Denver very rarely represents the Colorado Rocky Mountains. Often times, when Denver is experiencing a warm period in the middle of winter, it is still very much in fact, a winter wonderland here in the mountains. To that point, Denver is currently seeing temperatures in the mid 70’s and yet here in the high country, our snowpack is at 118-124%. Unfortunately, the local weather forecasters around the country feel it necessary to shout to the world that “Colorado” is seeing unseasonably warm temperatures which creates an uphill battle for all of us local businesses that depend on the winter travelers.

When the forecasters of the world lump the entire state of Colorado in with Denver’s weather pattern, you can literally see online searchers and bookings drop severely. Vail Resorts is often times the most susceptible to this penalty but even the local, small businesses feel the pain. What makes the matter even more difficult is that at a micro level, even the mountain towns see warm weather during the winter months that do not reflect the snow on the hill. Here in the Vail Valley, many locals choose to live in Edwards, Colorado because of the “Banana Belt” as it’s called. The belt is a strange occurrence where the western canyon causes a split in the weather pattern. Edwards will stay sunny and warm while the mountains to the north and south stay covered in snow. Even as I write this article, I am sitting in shorts and a T-shirt while watching my neighbors heading out to go cross-country skiing.

To even further complicate the forecast, the mountains can create their own weather pattern and their own precipitation – known as the Orographic Lifting. Orographic lifting refers to the changes in air flow when the topography of the land forces the air up a mountain. When the weather system moves across the land, it has no choice but to follow the topography of the land below it; air must go over mountains and through the valleys. As elevation changes with terrain, the pressure and temperature of the weather system change as well. All of this combined can cause the Mountains to create their own weather system and precipitation.

We recently had a family call us from South Carolina concerned about their travel plans. After hearing their local weathermen speak of the unseasonably warm temperatures in “Colorado” they began to question their own vacation plans. Thankfully, they had the foresight to call us and confirm whether or not the reports were true. We were able to quickly explain what the snow conditions were versus the in-town temperatures.  They made the trip out and at the end of their stay, they thanked us because they had the time of their life being able to ski and snowmobile in great snow conditions while enjoying the warmer temperatures in town.

Small businesses can’t afford to mislead people here in the mountains; we are too dependent on loyal customers. If you do plan on coming to Colorado to enjoy the snow, please do not put your travel plans in the hands of a weather forecaster in Toledo. Simply call the local shop that you plan on visiting or at the very least visit the Rocky Mountain Adventure Rentals Snow Report which displays the base depths of all of the Colorado snow basins. You can also visit sites such as snotel which are more scientific in their approach and unlike local weathermen, snotel is not trying to create a story out of nothing.

You worked hard for your vacation, don’t let it pass you by because of an irresponsible forecaster who didn’t take the time to research the difference between Denver and the state of Colorado. Many forecasters’ around the country fail to even recognize that the snowiest months in Colorado are actually in March and April.

I write this piece on behalf of all local mountain businesses here in the great state of Colorado. It’s a topic that has been bothering me for years and I felt now was the time to put those thoughts to paper due to the increase in faulty reports nationwide.

Our site relies on cookies to provide the best possible experience.ok, cool